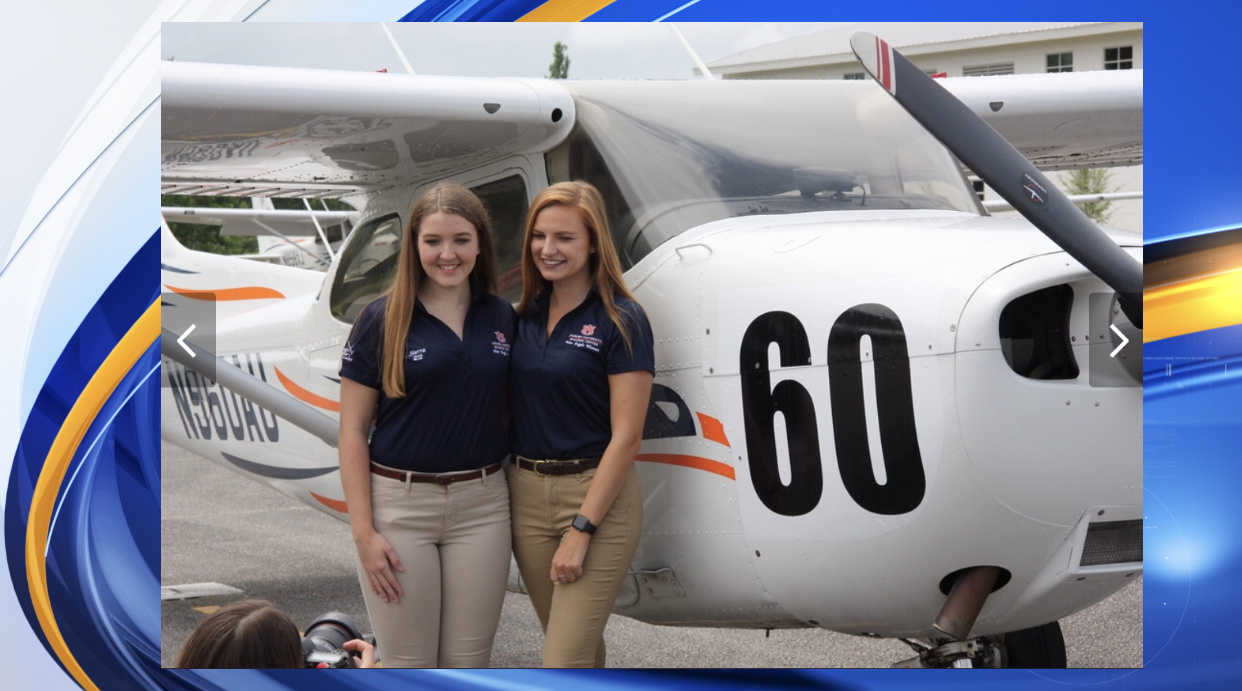 Four Auburn students in teams of two are hoping to make history during the 43rd annual Air Race Classic.

Considered the “epicenter of women’s air racing,” the event will take place June 18-21 as teams of pilots travel 2,538 statute miles and make nine stops at timing points across the United States and Canada, including a June 18 stop in LaGrange, Georgia. Auburn University is one of only 15 universities competing in the 2019 race.

While Auburn has previously sent one team to the Air Race Classic, the university sent a second team this year thanks to the 163 donors who participated in Tiger Giving Day. The funds cover supply fuel, flight costs, food, lodging and training.

“It means a lot to us that people who might not even be connected to aviation chose to donate and help send us to the race,” said Higdon.

This year’s course begins in Jackson, Tennessee, and will take racers from the home of rockabilly and the blues in the American South across Midwestern farmlands and northward around the Great Lakes and across southern Ontario, ending near Niagara Falls.

“It’s exciting to bring an Auburn plane to Canada,” said Miller. “I don’t think that’s ever been done before.”

Along with the chance to win the Air Race Classic, the highest-scoring collegiate team has the chance to have their names engraved on the coveted Collegiate Challenge Trophy.

“Sending two teams to the Air Race Classic shows how dedicated Auburn is to students. It also shows our commitment in preparing the next generation of pilots,” said College of Liberal Arts Dean Joseph Aistrup.

The Auburn community can cheer on Auburn’s teams on June 18 at their first stop at LaGrange-Callaway Airport (KLGC). Auburn’s pilots are projected to land at KLGC between noon and 1 p.m. EST. Learn more about the pilots and follow them on the Air Race Classic route at www.auburn-arc.com.

No surprise, our forecast remains the same to end the week

FORECAST: Banking on more early sunshine and a stray afternoon storm or two

Hot through the end of the week, slight warm-up come the weekend

Rain chances lower and the heat cranks up

Stuck between two systems then the humid air gets squeezed out

TAMPA, Fla. (WFLA) -- A Florida public school teacher has written her own obituary amid growing concerns from teachers who fear returning to the classroom during the coronavirus pandemic, WJAX reported.

“With profound sadness, I announce the passing of Whitney Leigh Reddick,” the Jacksonville, Florida, teacher wrote in her obituary posted on Facebook on Tuesday. “A loving and devoted teacher, mother, daughter, wife, aunt, and friend to all whose lives she touched, on August 7th, 2020. She left us while alone in isolation and on a ventilator at a Duval County hospital in Jacksonville, Florida.”

DALLAS, Ga. -- A Georgia high school student says she was suspended after she posted a photo of a crowded hallway at her school.

COVID & the Classroom: Coping with the struggle

HUNTSVILLE, Ala. - Nearly five months have passed since the Tennessee Valley’s students last attended school. In those weeks, parents, guardians, teachers and school staff have been inundated with a dizzying amount of options, procedures and guidance on how to best manage education during the pandemic.

As 28 public school districts and roughly three dozen private schools get ready to start the 2020-21 school year, educators and school leaders are faced with the ultimate test of their problem-solving skills.

Car accident on County Road 14 in Hurtsboro leaves one dead

21 people shot, one killed at outdoor gathering in Southeast D.C.

Michigan camping is just a click away, catch the peak of the Perseid meteor shower this week

Which face masks are the most (and least) effective at protecting you from COVID-19?

Dispute between two men leads to one shot on 1st Avenue

Car accident on County Road 14 in Hurtsboro leaves one dead

21 people shot, one killed at outdoor gathering in Southeast D.C.

Michigan camping is just a click away, catch the peak of the Perseid meteor shower this week

Dispute between two men leads to one shot on 1st Avenue