DESTIN, Fla. (WRBL) – An Indiana mother is sharing her family’s terrifying battle with a flesh-eating bacterial infection on social media in an effort to educate and protect other summer beach travelers.

“I have spent the past few days contemplating on if I should publicly share Kylei’s situation. I have spent the past few days seeing numerous friends and family at the beach enjoying their family vacations, and I can’t help but feel sick to my stomach and fear for those I know. We were just there, doing the same thing a week ago. We were on vacation, enjoying the warm weather and the beach. Now, now we are here and I felt compelled to share more in detail of how we had to fight to save her life,” shared Brown. 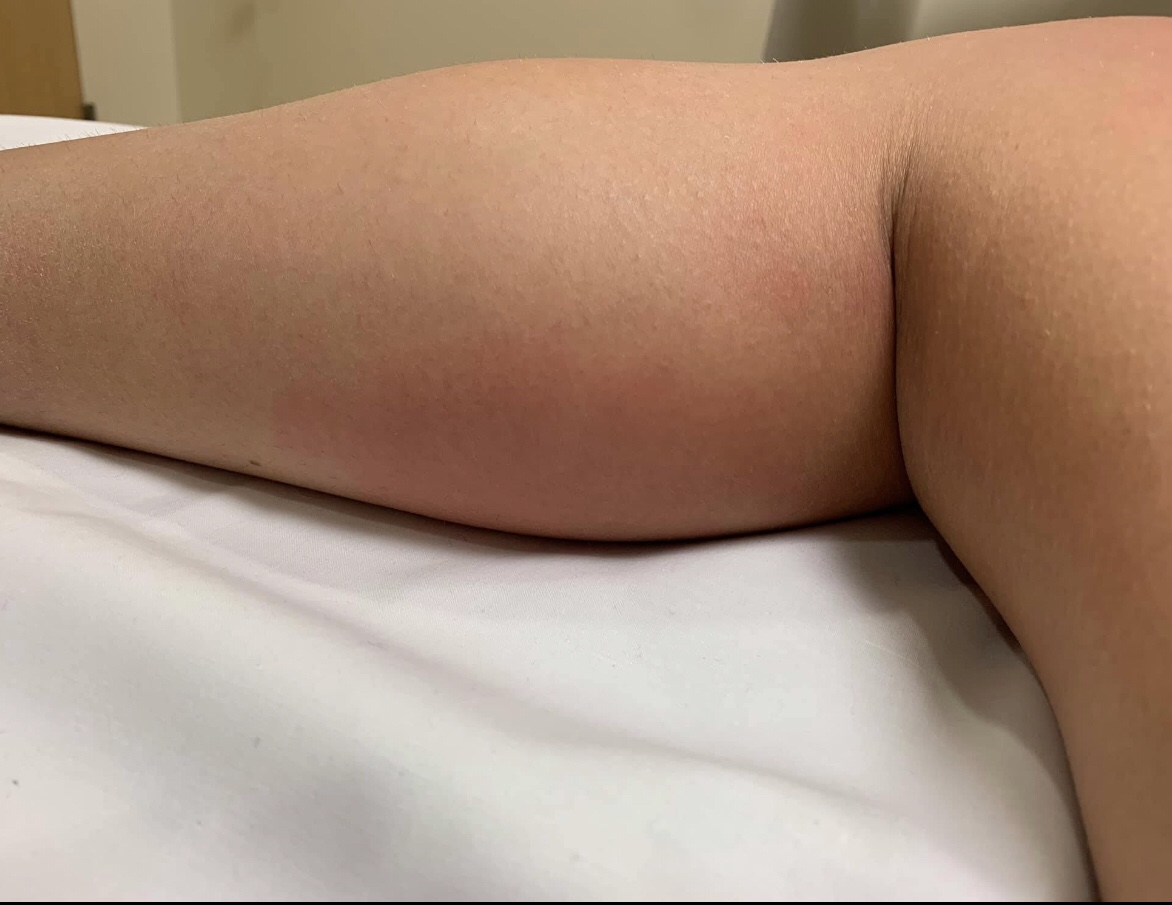 The family arrived in Destin, Florida on Friday June 7th, where it had been storming. They went to the beach on Sunday, June 9th, and then she swam in the pool at the hotel that night, which Brown says is chlorinated and constantly being filtered.

Brown says the beach was closed Sunday at Pompano beach. Brown says they weren’t letting people get out into the water beyond ankle deep, the storms from the days prior had stirred up the ocean and it wasn’t as clear as it normally is.

“The water looked murky. We were only allowed in the water to our ankles because the waves were huge and the undertow was too dangerous. We made the best of it and had a great day at the beach. Monday morning, June 10th, she woke up with pain in her calf. I thought it was a Charlie horse. It got better throughout the day and she walked fine. Tuesday, June 11th, she woke with more pain and could only walk on her toes the whole day. I though it was odd to have a Charlie horse the whole day and not get better. So I thought then maybe she pulled a muscle somehow, although not recalling how she would have. Wednesday morning, June 12th, she had severe pain in her calf and was in tears trying to walk. She couldn’t. I had to put her on my back and carry her around. We left for home that morning,” said Brown.

Thursday, June 13th, they went to the doctor, still carrying her around. At first doctor’s weren’t sure what was wrong and her level of pain was concerning. Doctors sent the child to Riley Medical Center, thinking it may be a blood clot from traveling.

“She started developing a rash on her body. We got to Riley at about 2pm. After arriving and inspecting her leg, it had swelled a lot, was red, had a red line running down her calf and was warm to the touch. She had a fever when we arrived at Riley ER of 99.9. About a half an hour later it had already rose to 103. Everything started going downhill quickly, because to sum things up some, she had contracted a bacteria somehow that had already turned into infection. It was an aggressive infection and has already spread up her leg to her thigh. Her BP was in critical numbers and her HR was very high. They had 4 IVs in and pumping fluids aggressively by machine and by hand simultaneously. She was admitted and put in PICU. They were trying to stabilize her. They ran tests, took xrays of her leg, which ruled out the blood clot. They ended up putting her on a BP med to help stabilize her. After many many hours, they finally were able to stabilize her,” shared Brown.

Doctor’s discovered the infection has spread to the 12-year-old’s thigh. 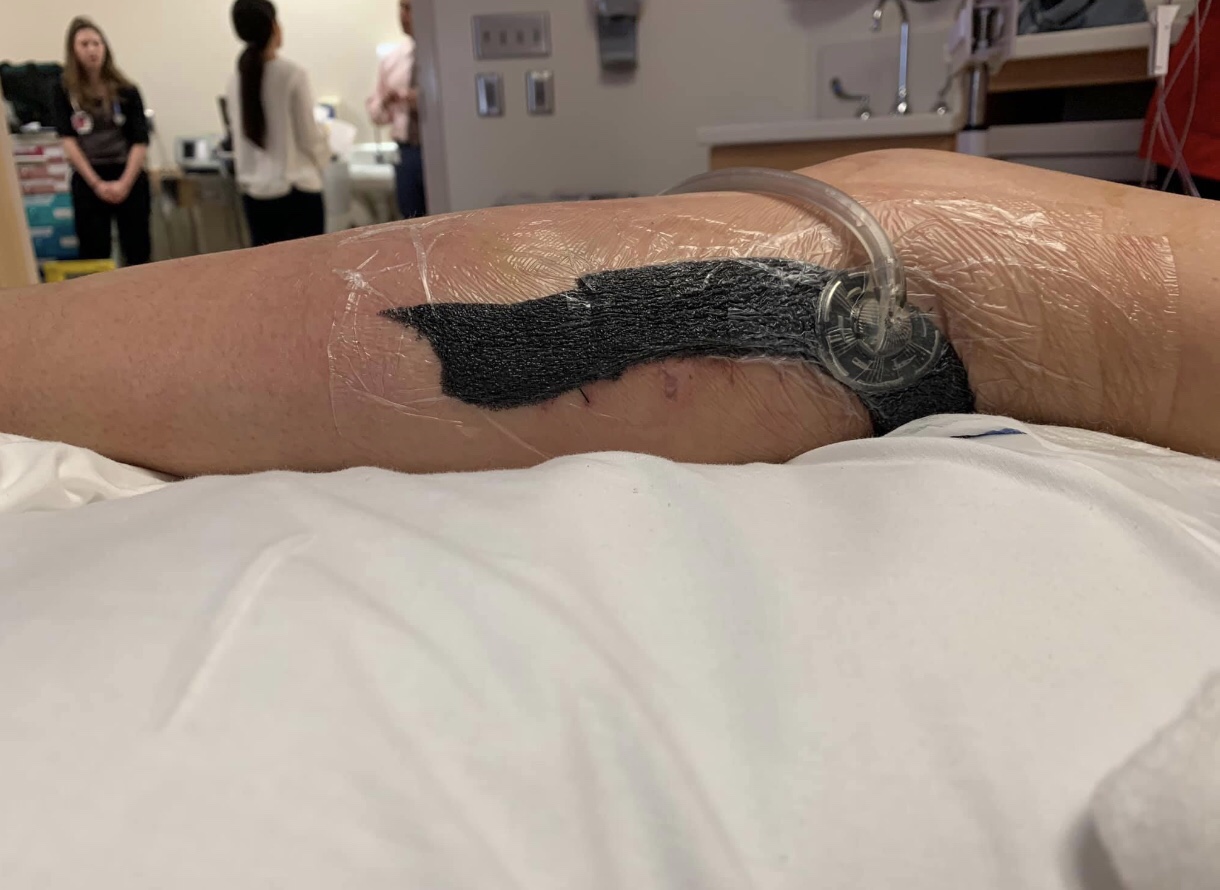 “She had a pocket of infection behind her knee they pulled out via needle. Then they took her in for emergency surgery to try to remove the infection. The infection was in her muscle lining (fascia). They put on a wound vac instead of closing it. We learned Kylei had a very serious infection and the surgery to remove the infection was to try to save her leg, but most importantly her life. She developed septic shock. She had a second surgery. She improved some and we were able to leave PICU and to a regular room and floor. She had a 3rd surgery, which they didn’t find any more infection so they closed it, placing the wound vac to suction any thing that may seep out of the incision,” said Brown

“They have put in 6 IVs and she has been on 4 potent antibiotics that are causing her IVs and veins to go bad. She now has a PICC line and all other IVs are out. After spending a week at Riley, we were finally released to go home. Kylei is doing better and stabilized, but she is still sick and have a long road of recovery to go. We are taking oral antibiotics as well as IV antibiotics 3 times a day, and pain meds every for hours. I have to keep a constant watch of her PICC line, her leg and her temperature. After days of only knowing she had contracted a bacteria and quickly turning into an aggressive infection, I now have a name. Kylei has Necrotizing Fasciitis,” she shared.

Necrotizing Fasciitis is a type of flesh eating bacteria, that is normally found in water. Brown learned it can be contracted by a scrape, wound, new tattoo, or even through a bruised area of skin. 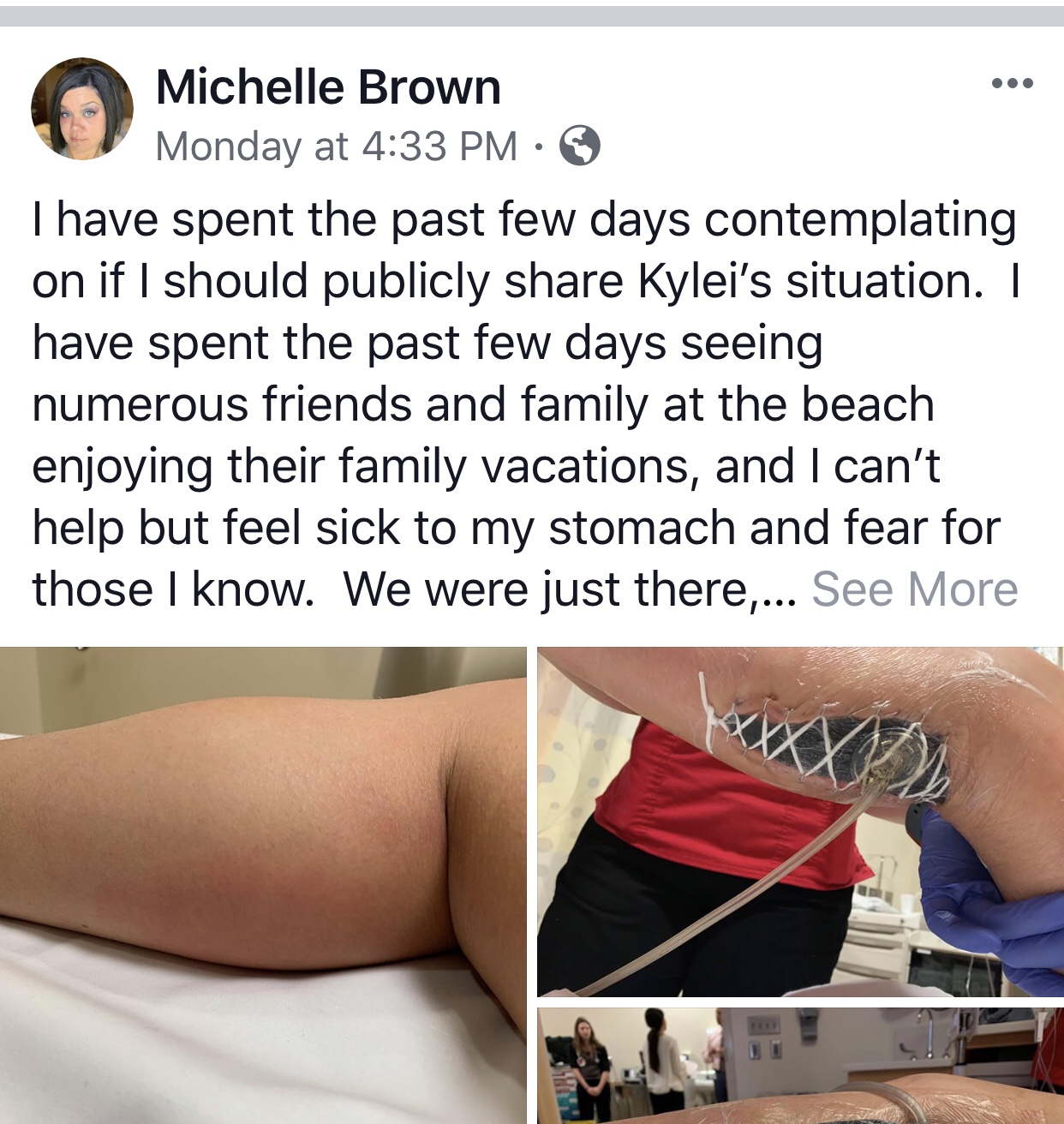 Brown says after researching more, she learned one out of three who contract Necrotizing Fasciitis die from it, as well as septic shock making that fatality rate even more relevant.

“I whole heartedly believe she contracted the bacteria through a scrape on her big toe (foot on same leg), while we visited Pompano Beach in Destin, Florida,” said Brown. “I am just so thankful for the many prayers, the quick response and efforts of her medical teams and the aggressive treatment she has received. Because of that, I still have my baby girl with me today.”

Brown says her daughter is getting better, but is still on the road to recovery.

“We will have numerous doctors visits, physical therapy and blood work to continue, but all that matters is my girl is ALIVE,” she posted.

Brown writes she wanted to share her story in hopes it may help save someone else. The mom says it’s critical to be aware of the signs and symptoms and getting treatment quickly.

First day of school forecast: Watch out for storms

Scattered Showers & Storms for Sunday, Back To Isolated …

Saturday is the best day for outdoor plans

Mom on body found near school: ‘I don’t let my children …

Mayor: Violence in Juarez is gang-on-gang