by: The Associated Press

CLEVELAND (AP) — All those boos aimed at Commissioner Roger Goodell that have become an NFL draft tradition will be slightly muted this year.

At least they’ll be heard.

After going all virtual in 2020 due to the COVID-19 pandemic, the three-day draft, which has grown into one of America’s biggest, non-game sporting events, returns with an outdoor event. Thousands of fans who will be separated by their loyalties — and whether they’ve been vaccinated.

Back on the road in Cleveland, this draft will be unlike any other.

Forced to cancel last year’s event in Las Vegas, the league is using lessons learned while plowing through an unprecedented, socially distanced 2020 season and holding the Super Bowl in Tampa, to have a draft that will look much more like normal — well, the new normal — with fans wearing their favorite team’s colors and required masks.

It’s not perfect, but it’s a positive step.

“It feels very good to stand outside at an event site, and it comes at a time where I think we need to do this,” Jon Barker, NFL head of live event productions said as workers put the finishing touches on a 95-foot-high temporary outdoor theater along Lake Erie and next to FirstEnergy Stadium and the Rock & Roll Hall of Fame.

“We have to do this,” he said. “We need to get people out and back to live events and to experience things like this, and the draft is one of those great events that can bring everybody together and do that.”

Goodell, who cozily hosted last year’s draft from his basement in New York, will again be at the podium starting Thursday. And yes, to personally deliver one of his hearty hugs or a fist bump to the 13 attending top prospects, all of whom will be tested again for COVID-19 on Wednesday.

Clemson quarterback Trevor Lawrence seems a lock to be picked first overall by Jacksonville. And while he decided not to be in Cleveland for his first big moment as a pro, Lawrence will virtually connect with Goodell and appear on giant video screens to be presented his jersey.

“It’s unique in that we’re merging two event styles into one,” Barker said. “This is the moment of time we are in.”

With the virus still active, other adjustments were made to assure everyone’s safety.

Players will wait to be chosen in socially distanced “living rooms” with family members in an off-stage area fitted with the latest ventilation filtration systems. Once selected, they’ll walk down a hallway inspired by the city’s musical history before taking the stage.

Because most of the activities are outdoors, and fans will be masked and separated by barriers, there were no need for any extra measures inside the massive theater.

Rain is forecast for Thursday, but that’s not dampening enthusiasm in Cleveland, where the Browns’ revival is prompting championship talk for the first time in years and has reduced their role from draft headliner to host. They’re currently slated to pick 26th in the first round.

There were concerns that the Super Bowl would be a super spreader event, but that didn’t happen and the league has leaned on statistical data to plan for Cleveland.

“We have every confidence in the protocols and the guidance we continue to get,” said Peter O’Reilly, NFL executive vice president of club business & league events. “We know the pandemic is out there and that guides our every move, but also want to be able to point to brighter days ahead.”

A runway dividing the stage will separate lucky VIP guests chosen by the 32 teams after they provided proof of vaccination. In fact, the 4,000 to 5,000 fans within 100 or so yards of the stage were required to show they’ve gotten shots.

As they cheer and jeer selections, fans will be gently reminded by roving safety managers to keep their mandatory masks in place. There will also be hand sanitizing stations throughout the 2.5 million square foot area.

The NFL doesn’t want to penalize anyone from having fun, but a good time can’t come at the expense of health and safety.

There will be a limit of 50,000 fans per day —- the league estimates it would have drawn up to 400,000 over three days in a non-pandemic year — allowed on site to watch and enjoy the interactive NFL Draft Experience, which gives fans a chance to go inside the Browns’ stadium and attempt a field goal or take a photo with the Lombardi Trophy.

From a broadcast standpoint, the 2020 draft opened up possibilities and perhaps served as a template for productions and events going forward.

“There is no backstage anymore,” Barker said. “People want access. I can never get a million people backstage, but through technology you can sit in Los Angeles on your sofa and we’re going to be able to give you access to see what you wouldn’t necessarily be able to see and that’s where the event business as an industry is going to move.

First day of school forecast: Watch out for storms

Scattered Showers & Storms for Sunday, Back To Isolated …

Saturday is the best day for outdoor plans

Mom on body found near school: ‘I don’t let my children …

Mayor: Violence in Juarez is gang-on-gang 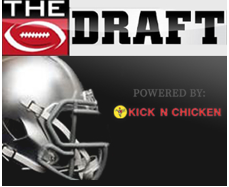